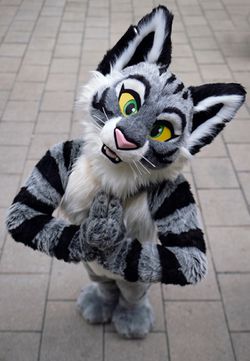 Shanie, also known as ShanieTX, is a female UK-based fursuiter and a member of the UKFur forums. She is mostly active within the southeastern region as she is based in Guildford, England, UK.[1]

Shanie has a keen interest in entertainment consumer computer technology and loves anything from Apple, Sony, Nintendo and Mercedes-Benz.

Shanie joined the fandom in 1999 by playing the MMORPG, Furcadia, and then starting to attend UKFur's meets in October 2010, with LondonFurs being the first one. She has since been to many other furry events, like Frantic Eufuria, and conventions, like ConFuzzled, across the United Kingdom.

Shanie's fursona, Shanie Tabby Cat, is a silver and white British shorthair tabby domestic house cat with black blotched tabby markings. She has striking yellow and green eyes and has one small silver hooped earring in each of her ears. She (sometimes) wears glasses and a yellow collar with her name tag and bell on.

Shanie was also the name of a "Cyber Dragon" character that she made, which has since been retired.

Shanie Tabby Cat is a full suit made in 2020 by One Fur All, with a realistic design.

Shanie Tabby Cat is a full suit made in 2017 by Don't Hug Cacti, with a toony design.

Shanie Tabby Cat is a full suit made in 2014 by Latin Vixen of MixedCandy, with a semi-toony design.

Shanie's "Cyber Dragon" was also full suit made in 2011 by Atalon the Deer in Germany.