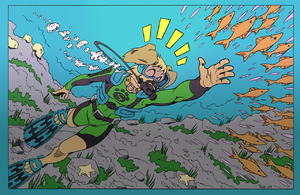 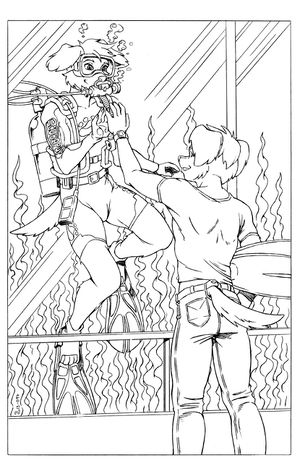 Shamrock's fursona is a Golden Labrador Retriever.[2] The name Shamrock, and the inspiration for the fursona, came from the pet that was in his family for seventeen years, which was also a Golden Lab Retriever. The name Scubapup was given to him by a fellow diver, also in the furry fandom.

Shamrock is covered in golden fur, with green eyes, a black nose, and pink paw-pads. His build is usually thin and athletic.

Shamrock wears an orange collar and sometimes carries a diving knife. His wetsuit is black and green with either "Scubapup" or "Shamrock" on the arms, and a pawprint with "S" in the center of the chest. He owns several sets of fins, but is most commonly seen with blue split fins with a custom 'H' pattern down the center. Shamrock owns a custom oral/nasal regulator that has a standard mouthpiece, but has a snap-on nose clip. He dives with either one or two tanks, with custom hoses for each.

Shamrock's fursuit was created by Kandi Kat Kreations and debuted at Furry Weekend Atlanta 2013. It made another appearance at Mephit Furmeet in the same year.

Shamrock is a Milfur, serving in the United States Air Force.[2]

Shamrock is a heavy video game player, with a preference towards Skyrim, Halo 3, and Halo: Reach.[2] He also plays DJ Hero 2.

Shamrock is a qualified Open Water SCUBA diver and enjoys working on cars.