The comic is inspired by Sonic the Hedgehog as well as a few other comic book stories. Though the comic is for adults, it also has a comedy feel to it along with action, romance, and psychology. The comic is posted on Deviant Art and Fur Affinity. 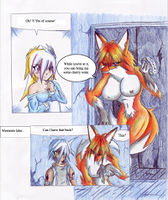