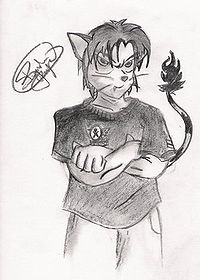 ShadowPaladin, or Brandon Hayman, is primarily a furry artist, having gotten his (albeit small) start on DeviantART. He is a Canadian national, born in Moncton, New Brunswick, which is famous for not having a good mall. He is also an outcast in his family, being the only one born outside his childhood home of North Bay, Ontario. He is known for having been a member of the now-defunct StonerBunny.net, a forum which also hosted a forum-based RP. He has a brother, Aaron Hayman, who has been long known to cause chaos and overall irritation. He is not known as an artist, simply because no one likes to look at his face, let alone his art. He however, is known for failing at Life, the Universe, and Everything. He is also the question mentioned in the Hitchiker's Guide, with 42 being the number of sticks he was beaten with at birth.

For the most part, Brandon draws with soft lead and a rubber eraser, preferring to use both H2 and HB pencils on sketchbook paper. Occasionally, he uses an Adobe program. He can also use a tablet, because he promised me he would. 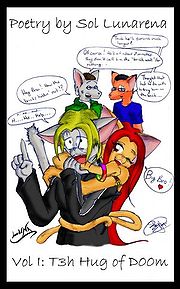 The cover to LunaNeko's personal poetry book, done as a collaboration between the two.

His fursona is a cat, not much different from his regular self. His fur is grey, though he himself has never coloured it in. It has always been done by LunaNeko, who runs ShadowPaladinCG. He most often wears his favourite sweater; Black with grey stripes along the arms, and yellow stripes bordering the grey ones, as well as a yellow collar. (of the shirt, not on his person) However, his fursona has gone through several changes, one of which wears a trenchcoat and mummy-like bandages, and one of which has demon wings, and a black robe with red trim. This fursona, however, has its own name, and goes by 'Damien.'