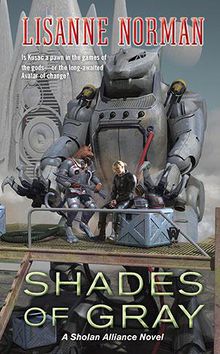 Shades of Gray is the eighth book of the Sholan Alliance Series, written by Lisanne Norman. Although they are best classified as science fiction, they also include elements of fantasy and romance. Many of the main characters are telepaths, which is one of the major elements of the series.

The battle for an empire has now reached a critical turning point. With the seat of power of the Valtegan Empire stolen by an usurper and Prince Zsurtul's entire family executed, the only hope to avoid a galaxy-wide war of conquest is to retake the Palace and the City of Light, and place Prince Zsurtul on the throne. But whether Kusac, his fellow Sholans, and their allies can accomplish this seemingly impossible task remains to be seen.

And with the other two members of his Triad - Carrie and Kaid - on their way to rendezvous point, Kusac will not be able to avoid a long overdue confrontation with those he cares about most.

To make the situation even worse, both the gods and the agents of the Camarilla - the elder races' secret ruling organization - have targeted Kusac as a pawn in their plans to control the destinies of the Sholans, Humans, and Valtegans. Hailed by all as the long-awaited Avatar, can Kusac break free of manipulation, and chart a new future for all three races?