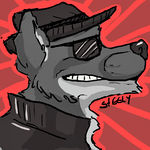 As a youngster, Shade was naturally drawn to anthropomorphic television shows, such as Little Bear, Franklin, and Swat Kats. Not being able to put a finger on it, his interest died, only to be resurrected after watching a Youtube video of Skroy. Much research followed, including the infamous CSI episode and 1000 Ways to Die. In late 2009, Shade declared himself a furry.

He joined Furry Teens in February 2011, and made close friends with some fellow furs. He is working on his first two novels, the first to be published by TeenPub Press, and the second by SofaWolf Press.[citation needed]

On many places on the internet, Shade is more commonly known by his "Rawlin Brooks" pen name. He often responds to questions about his nationality and race by brightly responding, "I'm just an over-tanned American".

Shade's fursona is a 5' 10" (1.7 meters) Grey Wolf who commonly dresses in dark colors, most notable in his trademark black fedora, jacket, and jeans.