Codename Werewolf is a webcomic created by Hyenafur which aims to fill in certain background details of the Extinctioners storyline, along with a completely separate storyline. It follows the story of a United States Soldier thrown several thousand years into the future by mistake, and how he deals with the new life thrust upon him. The tale is combined with humor about movies, music, the military, and politics. There is one issue published on the Internet, though not on its own site.

Codename Werewolf started out in 2005 as a crossover comic between Stargate SG-1 and Extinctioners, though this concept was scrapped in favor of a more original idea. In 2006, the first working comic was created, with Hyenafur doing the writing and the art. The comic was scrapped entirely to focus on the original work Two Silver Ankhs in 2008.

Characters that are not in the Extinctioners comics:

Sgt. Kratt is the lead character in Codename Werewolf; he has yet to appear in any Extinctioners comics.

Sgt. Johan Kratt is a human who serves as a Door Gunner at Headquarters Company, 1st Battalion, 378th Special Operations Aviation, Montana Army National Guard, before being accidentally sent forward into the future by Miki and Rokko. Once there, his life is saved by Dr. Ken Donnoura, who performs an experimental heart surgery by injecting him with nanites. The experimental procedure had the side effect of turning him into a humanimal, specifically an anthropomorphic brown hyena. Eventually he is given the power to transform back into a human almost at will, giving him the nickname of Werewolf.

Organizations that are not in the Extinctioners comics: 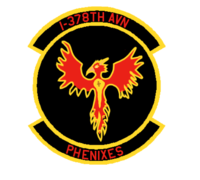 "Arise from the Ashes."

The 378th AVN was created from the old 189th AVN out of Helena, Montana, so a phoenix was the perfect choice as it arose from the ashes of another squadron. The unit wanted to be called the Phoenix, but because an Aviation Battalion in Arizona already had that name, the 378th opted to change the name by one letter, so they removed the "o".

Sgt. Kratt is accidentally sent into the future by Miki and Rokko, after they mistake his helicopter for one carrying Delta Force operatives. After his helicopter crashes into a skyscraper in downtown Yukoutoki Major, the sergeant is accidentally shot by the Andorozon Tsuneko in a friendly fire incident. He is saved only when Dr. Ken Donnoura tries an experimental surgery on his heart using nanites, which turn him into a humanimal. When he awakens from his two-month stasis session, he finds the Evil Cat Sisters (ECS) are ransacking Sei Ryu Labs.