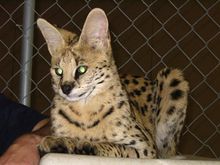 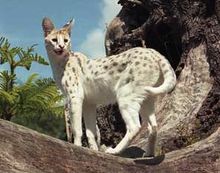 Portrait of a Serval. Artwork by Katherine Delany.

The Serval is a species of wild cat native to Africa. Around a meter in length, they are slender, with long legs and a fairly short tail. Their large oval ears are tall are set close together.

Most Servals have a bold pattern of black or very dark brown spots on a tawny background, with the usual countershading of white on throat and underside.

The Servaline variation, once thought to be a separate species, has a duller, "freckled" pattern of spots. Melanistic (near-black) Servals are fairly common. They are usually found in mountains or forested areas, rather than the grasslands where most Servals make their home.

A very few white or "white-footed" Servals have been born in captivity. These are white with some golden patches and silvery-grey spots, with blue or green eyes; they are not albinos.

There are a number of anthropomorphic Serval characters associated with the furry fandom, some of them fursonas.

There have been quadruped Serval characters on MUCKs and other multiplayer worlds themed around The Lion King and African wildlife. Among these are The Lion King MUCK, African Tails MUCK, Sunrise MUCK, and Maisha MUCK.

Furry artist Equivamp, when using Servals in her work, has been known to portray them as Tribal animals that attach birds to their backs, giving them the ability to fly.