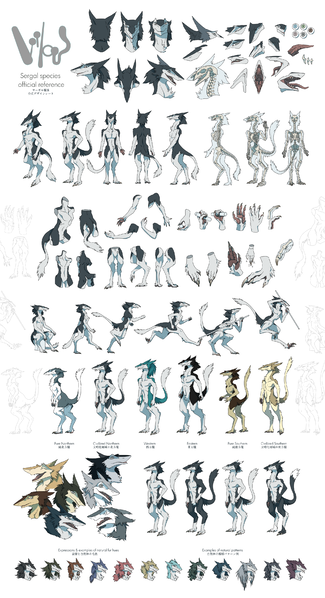 A Sergal is a race of shark-like headed people from the world of Vilous universe. They are living on the planet Tal for now, although their distant ancestors originated from the planet Eltus. When they were living on Eltus, they appeared identical to Earth's humans, but due to an unspecified event, they assumed their current form, then all of them emigrated to planet Tal.[1]

The Sergal's design was influenced by a number of non-fictional animals, but isn't a hybrid. Mick has stated that the design was originally inspired by rabbits and fighter aircraft, while the feet were based on those of rabbits and kangaroos. [2] 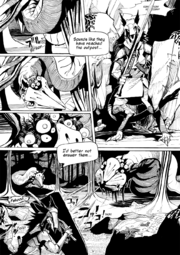 Sergal is confronting the Talyxian forest leeches. - From official comic of The World of Vilous.

Sergals are predominantly biologically similar to mammals. Their noses are slim and pointy, as of the nose of a shark. They have rodent-like fingers, kangaroo's feet, and a noticeably raised breastbone which is apt to be mistaken for a lump of fluffy fur in center of their chest[3]. People often draw their ears as same as a cat, wolf, or fox. But they are like the Pokémon Pikachu or Umbreon, in that they don't have clearly visible external auditory meatuses on the outside. Strictly speaking, their meatuses are facing backwards (in relation to a dog/cat/fox's) In addition, due to their long fur, it is very difficult to see their meatuses at a side view as well.

Their eyes face outwards, such as a rabbits' or most reptiles', but all child and Northern sergals eyes face frontward. Generally, sergal eyes, excluding those of Northen sergals, grow to the sides of their heads as they age.

A sergal may live between 60 and 80 years of age, but the average lifespan of most sergals is currently 20 - 30 years due to the many threats from dangerous and alien wild creatures living their surrounding environment. The average height of a sergal ranges from about 6 feet to 6.4 feet tall [4], though this average has shown to be increasing over the past several generations.

While sergals are technically omnivorous creatures, the average individual's basic diet will typically consist of of small animals and fish. In Trancy Mick's Old Age canon novella writings, they have also shown to have cannibalistic traits due to Rain Silves; sergals as a whole have often been misunderstood as monstrously bestial due to this. But keep in mind that this is uncommon behavior for a typical sergal, and confined to Rain Silves and her vassals particularly.

A sergal's coat may be any range of colors with various styles of markings.

Irises, however, are limited in their color; either grey or light blue. However, there is at least one known case of mutation resulting in color changes, such as General Rain Silves' gold irises.

The female sergal also possesses a prehensile clitoral hood that covers their vulva. This hood has been described to "look like a tongue," and has been shown to be capable of grasping and manipulating objects, as well as entering the vagina, possibly to protect it.

Meanwhile, people often draw a canines knot on the male sergals, but they do not have it in the official canon.[5]

The "Early New Age" canon introduced back around 2009 by Mick, was largely temporary and experimental (it included changes such as female Sergals having breasts, a feathery rear, Northern Sergal's ears are extremely short, etc.) As those "major features of the new Sergal" permeated, before very long some of those characteristics were discarded in the latest version of the official canon. Because of this, a confusing situation arose. This entry describes the information based on the New Age Canon and is the latest version at present. about this in detail, read the Sergals Vilous official wiki's page.

These groups have civilizations of their own, and the world war was caused by General Rain, has continued for a long time. The Shigu clan which General Rain leads, planned conquest of a whole of Tal. Militant Sergals wear metal or ceramic armor. Southern Sergals wear metal; Eastern and Northern generally wear ceramic armor. Eastern and Northern Sergals are also known to use bone armor. Sergals usually favor polearms, and are capable of great feats thanks to their strong, wiry limbs- with much denser muscles than human's. Their muscles are more akin to a chimpanzee's muscles.

Unlike Earth's humans, they generally don't stick to one partner, and are accepting of homosexual relations.[6]

Sergals also share their home with a number of other species such as the Agudners, who are a sapient even-toed ungulates species. There are facts that still remain unknown. Sergals are close to Agudners and have very long history and relationship with them, primarily Eastern Sergals and Southern Sergals.

People often believe Southern Sergals live with Nevreans. They are a sapient feathered dinosaurspecies and are viewed below Sergals. Contact with Nevreans is limited to regions; Most of Sergals did not know of Nevreans before Nevreans began emigrating to a southern city. The Nevrean's nation is both secluded exclusive. Their homeland is located in the West. Western Sergals are less populous and considered a sub-species of Northern Sergals. They had a relationship with the secluded Nevreans. Western Sergals were almost destroyed by General Rain, and all alliances of Nevreans and Western Sergals were completely lost.

Northern Sergals primarily live in the northern regions of Tal in primitive and rural areas near the forest, mainly Astna Plains. They have longest history and are the closest type to the original Sergal concept.

They have long, fluffy manes, usually with white abdomens, somewhat short ears and a thick face. Their primary fur colors are gray, blue, bluish gray, and bluish violet. As noticeable physical feature, they have a facing eyes in comparison with other Sergal types.

They lived a primitive tribal lifestyle with an animistic belief system for a long time, due to their cowardly and deeply religious nature. Their minds are easily influenced, a weakness General Rain exploited.

After domination by General Rain, their lifestyle totally changed and most of them became combatants who are loyal to Rain.

Southern Sergals primarily live in the southern regions of Tal in rural areas, small towns, and Gold Ring, a city built on the shore of the great Colvilous lake. A large majority live in the Gold Ring.

Their appearance differs greatly from their northern counterparts. Southern Sergals are generally shorter, slimmer, and thinner-furred. Their primary fur colors are brown, beige, blonde, and orange.

Southern Sergals consider themselves to be much more civilized and cultured than northern Sergals. They value knowledge greatly. and they live with another species, Agudners, with whom they share their homes, jobs, and culture. Fashion is popular with Southerns, who enjoy dying their fur bright colors. Southern women unlike northerns also have their own style of clothing, as they have some gender differences.

Eastern Sergals are the most numerous type, are mixed of Northern Sergals and Southern Sergals, and primarily live in the middle-east to south of Tal.

They have long, fluffy thick fur like Northern Sergals, and mainly deep colors like mixed colors; such as black, deep-gray, deep-brown, and deep-green. And their build is biggest among all of Sergals due to heterosis. They have the shortest ears and thickest faces.

They share their culture with Southern Sergals, specifically civilized and cultured sociality by relationship with Agudners. Therefore fashion like fur dyeing is popular among them, too. However they are some rustic in comparison with Southern. Also they have very superior hunting technique, there are many great hunters in them.

Western Sergals are a less numerous subspecies of Northern Sergals, living in the Northwest of Tal. Due to below lore reasons, there's very few total of their members, but they are treated as extinct species in official historical facts.[7]

Their appearances is similar to Northern Sergals, have slender body, intermediate cold colors fur such as green-blue and purple mainly.

They share their culture with Native Nevreans, specifically strict and clean culture with music, poem, and dance. They value beauty and arts greatly. There are many poets in them.

They had maintained a peaceful civilization of their own, but they were almost destroyed by General Rain due to Rain's lust for beautiful things, and all history of them is completely lost. The few survivors took refuge in Gold Ring, a southern land.