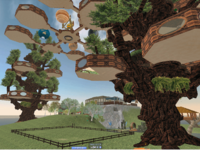 Serenity Woods is an island simulation in Second Life. It resides in the northern section of the Fur Valleys group, to the west of Wolf Valley and north of the Yang Sea. Founded in June 2006 by the former administrators of The Forest, the sim was mostly complete by the start of August.

Serenity Woods has both public land and rentable land with reasonable lease rates to help pay for the sim's monthly tier fee. Serenity Woods has also retained some aspects from The Forest by bringing back the Sandbox, the Furry Art Museum, the resident apartment tree houses, and reopened The Forest Store as the Serenity Market which features a unique rental system that offers greater flexibility to its merchants at reasonable prices adjusted by the LindeX market.

The Furry Art Museum contains various donated original furry artworks on display for all to see. While some of it is adult rated, the museum tends to carry mostly tasteful furry art instead of the stereotypical "spooge art."

The new Serenity Sandbox is a few meters larger than the old Forest Sandbox. Like the old one it is a regular hang-out spot for most furs new and old to the community. Unlike the old Forest Sandbox, this sandbox features a second level known as the Sky Sandbox which hovers 600m above the normal sandbox. Being this high up in the air allows for builders to construct larger objects as well as to be able to work with a higher FPS as there is less to draw at that height. Plans to expand the SkySandbox are underway in order to allow for prefab home builders (such as Alazarin who constructed the apartments) to have more room to work. The expansion concept will span most if not all of the sky above the public land.

aerial shot of the Serenity Apartments

The Serenity Treehouse Apartments have changed little from their original Forest counterparts. What has changed is the layout and building techniques used to construct them. Instead of having scattered treehouses and a sky villa it was opted to construct the treehouses into two separate trees on either end of the ground level sandbox with a bridge of apartments linking the two trees over the sandbox which offer a superb view of the entire sim. Better texturing and modern torus torturing techniques greatly lowered the prim count. Otherwise the basic layout of the apartments themselves are relatively unchanged.

The Serenity Woods Mall continues to evolve. A complete makeover of the structure was completed by Yiffy Yaffle in July of 2007.

The Serenity Woods Events team has been holding Release Parties for avatar makers releasing new furry avatars sold in the mall. Sales at these release parties can equal the total number of avatar sales for an entire month, which makes them popular for avatar makers. The parties have also become a very popular event for the community as a whole.

the entrance to The Cavern

The Cavern has been, as of this writing, sealed off for future use.

In February 2007 Serenity Woods went through some administrator changes following the purchase of the island from Foxkin Impfondo to Ron Overdrive. The changes allowed 3 new guides to join (Fausk DaSilva, Curt Pascal, and Emerald Burleigh ). The changes also expanded the staff, adding 4 roles to the group setup (Builders, Public Relations, Event Staff, and Marketing). 2 guides were elected to run each role (except for marketing which was decided to be left in the hands of Ron Overdrive who was best suited for the position. Within each group role the guides in charge are able to invite others to help.

On 24 June 2007 Ron announced that he would have to sell the sim. It was purchased less than an hour later by Mako Minogue and Kerwin Newall, owners of several sims in Fur Valleys. Rents were raised slightly to make it pay for itself.

By October 21st, over $1000 in donations had been raised to meet the US$1925 required to purchase the sim through a donation drive. Should the required amount fall short, donations are to be returned to the donors.

The Guides successfully organized various fund raising events over the next week to meet the financial goal. Curt Pascal was the leader of the fund raising effort with a lot of support from several key Guides and took over ownership (his credit card will be billed by Linden Labs) of the sim as trustee.

As of 4Nov07, Linden Labs was still in the process of transferring the financial ownership to Curt Pascal, with Mako Minogue staying on as a Guide and advisor.