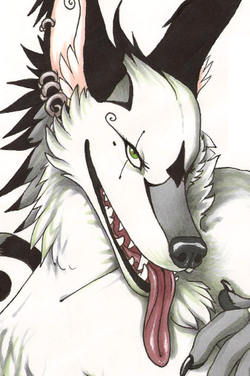 A self portrait done by Sepp.

Sepp, also known as Lisa Ommert, is an artist, born on June 20th, 1985. She resides in Milwaukie, Oregon. Sepp's fursona is a female white Sinopa rapax.

She began to draw furry artwork circa 2001, and jokingly blames her high school friend Swift for roping her into the furry fandom. Sepp's artwork consists primarily of character designs and pinups done in Prismacolor markers.

Sepp's pride and joy are her Dolostia creatures which she created in early 2007. Their appearance is that of a "wolf-raptor," and are both intelligent and notably vicious. The character Astrid is a Dolostia atrox, and is the second fursona to Sepp.