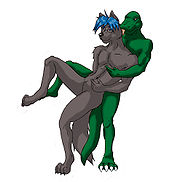 Sebek with his love, Alex. Drawing by Alexander Wolf.

Sebek Umber (born June 2, 1988)[1] is a gay American scalie who lives in Chesterfield, Massachusetts, U.S.A.[1] His fursona is a crocogator (crocodile-alligator hybrid).[2]

He is mates with fellow east-sider, Alexander Wolf.

He likes to play the Yu-Gi-Oh! TCG, his rarest cards being one ghost rare first edition Rainbow Dragon the others, a pair of Darklord Zeratos. He rarely enters tournaments on Sunday at X9 Games and wins a few times. He someday wants to be able to make it into the nationals and join the pro-circuit.

Sebek Umber has not one, two, but three personalities inside him. One a evil and destructive one born out of the power of darkness Dark Sebek and one another destructive soul born from the Light of Destruction Lightlord Sebek. Sebek has many different appearances and roles in many different games/anime fanfics. These will be mentioned in future edits, stay tuned.

Dark Sebek is a shadow born from Sebek's pent-up hatred and anger (like the Yu-Gi-Oh!(original and GX) characters: Yami Bakura, Yami Marik, Dark Zane AKA Hell Kaiser and Darkness). When Sebek is taken over by him, his scales turn to a darker hue, his facial expression becomes one of viciousness. His personality also changed from one kind and loving to one that is evil and heartless. His signature look is a dark trenchcoat and a dark teal pair of pants. A transparent pair of dark demon wings sometimes appear. A card version of him appears in my Yu-Gi-Oh! fanfics.

When the Light of Destruction (in reference to Yu-Gi-Oh! GX's Sartorious and the "Society of Light") takes over Sebek's body, his other dark self Lightlord Sebek awakens. This form of him believe strongly in showing others "the light" and cleansing the world of darkness in all it's facets. He considers himself a divine being, a "Lightlord" monster card version of him is is signature card in Yu-Gi-Oh! fanfics of mine. He sports a pair of flashy angel wings on his bright green scaled back as well as a halo over his head.

Sebek likes many kinds of video games most of them are RPGs, card games, survival horrors, light gun and flash games.

His favorite game series is the Final Fantasy series, he likes every title up to FF7 (including Crisis Core: FF7).

His all-time favorite game is Brave Fencer Musashi, this games was released in 1998 and Sebek bought it shortly after. Sebek liked the storyline, characters, monsters and the twists and turns as the game progressed. He especially liked the homosexual scribe from the beginning of he game, Scribe Shanky.