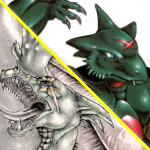 The two faces of ScyStorm.

ScyStorm, aka ScyScy, Scybug, and several other pet names, (born 1986) is a writer. He lives in Sparks, Nevada, U.S.A., and is one of the charter members and administrators of the Sierra Nevada Furs community. He is currently single and not looking.

Scy's original fursona upon de-lurking in a now-defunct Pokémon community was a slightly anthropomorphic Scyther. He later adapted a feral dragon fursona. He is quite attached to both selves and lets people he interacts with choose which they wish to imagine him as.

Scy has written stories as early as age 8, but started seriously developing the craft during his high school years. Since entering the furry fandom, he has written over 50 pieces (chapters and one-shot) totalling over 200k words. Most of his writings are Pokémon-based fanfiction. His writings can be found uploaded on several websites, including SoFurry.

Scy is an avid computer user, spending his free time simply surfing, talking to friends on IRC and Trillian, and listening to music. On IRC he moderates in a number of small furry chatrooms. He codes his webpages using scratch HTML, tables, and CSS on Notepad. He is a D&D player from as far back as 3rd edition. He is a lifelong Nintendo gamer, owning a Wii with 20+ games, but does have a small collection of one-player PC games.

His favorite music styles are hard rock, symphonic metal, progressive metal, metalcore, and horrorcore rap. His playlist features many things not of those genres, however.