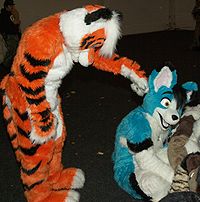 Scritch is also the name of a fursuit owned by Rakhan. For the website at scritch.es, see Scritch (website).

The term scritch, also known as scritchies, skritch, or skritches, is given to the act of gently scratching someone's back, neck or between the ears in an affectionate manner using one's fingernails (or more lightly with fingertips), or the claws of a fursuit or plushie.

Commonly considered a form of interpersonal furry affection, it's considered bad form to try this on strangers, or those furries not comfortable with the idea or the act. It is generally better to pat a fursuiter than to scritch them, as it has less chance of matting the fur.