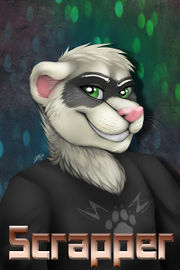 Scrapper Ferret, also known as SneakyFerret (born July 18),[1] is a fursuiter. His character is an extraordinarily active ferret with a harmless mischievous streak. This is shown through a perpetual smirk on his face.

Scrapper made his convention debut at Anthrocon 2010. He has also been to local meets in the Pittsburgh area.