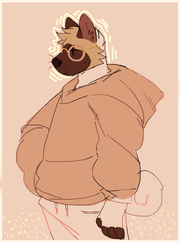 One of scpkid's fursonas, Kai

Scpkid (born, 1998) is a furry artist who lives in California. They are primarily known for their interesting style and character design; and the characters which make up their nicknamed Headworld, Dog of Paradise.

A male American Akita who lives in San Francisco, California. He is scpkid's main fursona and their current longest standing one. 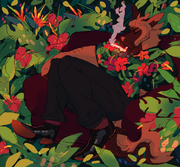 Tex, from Dog of Paradise Headworld

A headworld that scpkid created for their original characters, Tex and his friends. It takes place in Southern California and surrounds, sometimes venturing into Los Angeles and Las Vegas. It is a colorful and frightful world that is constantly growing and spawning new ideas and characters. 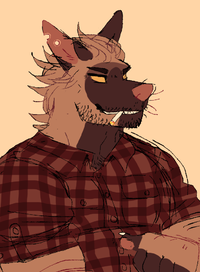 Tex is the main character of Dog of Paradise. They are a 40 something, California Valley Coyote. They live in Palm Springs and work as a hitman. They are most commonly associated with the desert, cactus and "Western" aesthetics (things like neon-signs). He is goofy, loveable and has a dad-like personality.

His appearance is flexible and fluid but he usually is muscular with a chub belly. He is however, seen mostly in buttoned shirts and pants (the more colorful and cactus-y the better).