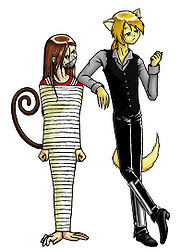 Scottykat ties up an annoying protagonist.

All of Harris' films are non-profit assignments, however, he has expressed interest in doing his own independent work.

Harris has declared his intentions to one day write a novel, however due to external constraints he is unable to focus on it. Claiming to have 'a writer's itch,' he publishes short works on the Internet, both original and fan fiction. While having written (and abandoned) many different stories, he pays most attention to Raveworks Fiction Adventures, based on the long-running British sci-fi show Doctor Who, and a supernatural medical drama Hope Road, which is, in his own words, 'a send-up of everything I like.'