Schande began his administration career in January of 2016, becoming an admin for the Pensacola-based group South Coast Furs (SCF). He remained an admin for SCF until November of that same year. After departing from SCF, Schande went on to co-found Open Coast. In 2017, he also became an admin for the Mobile, Alabama group, MobiFurs. In November 2017, Schande stepped down from his role as admin of Mobifurs to focus on developing events at Open Coast. In 2019, he stepped down from his admin role in Open Coast, wanting to solely focus on planning events for the group. 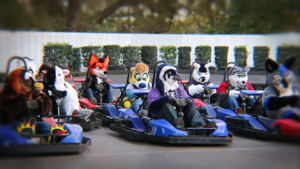 Schande co-founded Open Coast alongside Kabba and Brad The Colf.[2]

Schande was responsible for launching the Open Coast Grand Prix, a competitive go-kart racing event, where they currently serve as the event's lead administrator.

In his spare time, Schande is an amateur YouTuber.[3] He has also been involved with musical and nonmusical theatre since his early childhood and as of August 2017 was working on his first novel.[4] The first convention he attended was Furry Weekend Atlanta 2017. His fursuit was made by Wild Gadget.