Scarlet Ann Starfox (also known simply as Starfox) is a character in Extinctioners. She first appeared in Extinctioners volume 1, issue 1 (story and pencils by Shawntae Howard, inks by Malcolm Earle, and color by Eric Blumrich and Scotty Arsenault).

Ever since she was a kit, Scarlet has held family to be the most important part of her life. Her father, a Solar Strike Force General, and her mother, an Astrologist, brought her family up in a loving and tight-knit environment. She had three siblings. Erica Lynn Starfox, who was given the nickname of 'Foxy' by her father, was the youngest and Travas Avery Starfox, the oldest, would be Scarlet's role model.

Scarlet really looked up to her big brother, wanting to be just like him when she grew up. When he joined the Solar Strike Force, like most of the young tods did when they became of age, no one was happier for him than she was. Scarlet always loved the idea of flying and seeing her big brother achieve the chance to fly a fighter ship was like a dream come true, which she could live through him. She know when she grew up she would be a pilot too and fly just like her big brother. 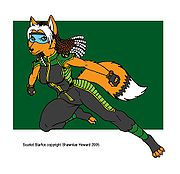 On her fourth birthday Travas arranged a special surprise for Scarlet. He was going to take her on a flight with him on his very own issued fighter. While giving her a tour of the hangar, where the fighters were stored, they were attacked by three felin thugs. In a struggle, Travas was fatally stabbed by one of the felins and was robbed for his paper credits. All of this while Scarlet, hiding behind one of the parked ships, watched in horror as her brother was murdered. Later it was learned that the three felins, who were only there as part of a supply shipment, managed to escape capture and thus was never brought to justice. This enraged the young Scarlet and planted a seed of hatred for felins in Scarlet's heart that would grow stronger as the years went by.

Years later she would join the Solar Strike Force herself to fulfill her brother's dream to become a pilot, but that too was shattered when alien forces attacked the space station Alopex and totally destroyed it and all vulpine staff stationed there, including her parents. She managed to escape with Redford Firefox (her lover), her sister Foxy, Artica Lagopus, and Slyvester Greytail and made her way to Alden. Once there she became involved with a rescue mission to save Katherine Fela and later Phenix. She is now a standard member of the Extinctioners, though for how long depends on the plans of Red.

Because of the events in her life, Scarlet has become really insecure about relationships due to losing so many loved ones to tragic events. So to cope she's built a really hard outward persona, for fear of being hurt again. While Scarlet's trust for felins is very low, she does seem to have formed a truce and mutual respect of Katherine Fela. However, those feelings don't necessarily transfer to Catrina Fela and Maxwell.