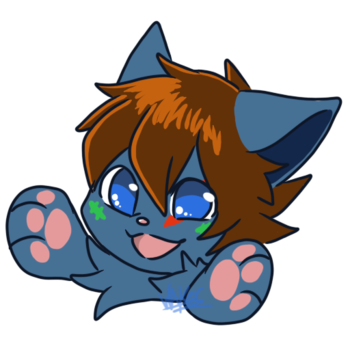 First original artwork by Scar, showing an early design of his character. 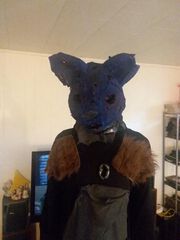 A photo taken right after the completion of Plight, complete with his original robed costume and adorned by Scar himself. 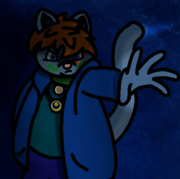 A modern example of both Scar's evolved design, and his art style. 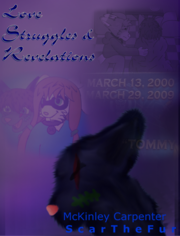 The cover art for Love, Struggles, & Revelations. It features art by Scar and some pictures taken by him. 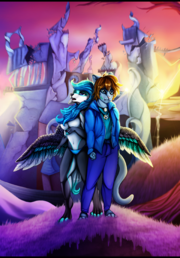 A joint commission between ScarTheFur, and Luna Sky from the artist Starduster. It has been called the coverart for a side project between them both called Blue Tails: Fall of Lumoria.

Scar has lived in Michigan since birth and got involved in the furry community on July 2nd, 2016. He started out of the Fur Affinity Forums before moving to Furry Amino later that year as his main platform. He has since expanded onto more platforms. Scar has dabbled in many areas of the fandom, and take a particular interest in furry music and furry history.

Scar started out as a simple blue cat with a scar through his left eye, but shortly after evolved into his modern design and has remained the same since. He is a British short-fur breed of domestic cat, with a dark blue pelt and two green stitch-like markings on his cheeks. He has medium-length brown hair, and as a rule, set by Scar himself is never portrayed "naked". His outfit has slowly been added to over the years, complete with a t-shirt, jeans, sweatshirt, collar, and pendant.

Scar's backstory was mostly underdeveloped until a friend of his named Luna Sky slowly warmed him up the idea. Starting with a developing power system based on electricity for use in roleplay, and eventually tying it in further to Luna's personal narrative of Lumoria. Outside of direct backstory, this incarnation of "ScarClaw72" is deemed to be one of the official ones for his umbrella universe The Warrior Story.

While waiting to eventually get a high-quality fursuit of his main fursona, Scar made a Five Nights at Freddy's inspired suit he dubbed The Epitome of Plight. It has since been shorted to just Plight. The character had many unique concepts that never came to fruition. This included a clockwork animatronic design and one that could function similar to Golden Freddy and Golden Bonny by allowing a character, in most cases Scar, to wear it. During such a mode of use, it would still remain sentience.

Plight's costume features a fursuit head and hand-paws. It is worn with a varying number of black robes, wrist and leg gauntlets, and black shoes.

Scar began his primary channel Scar Claw in 2014, and has continued regularly posting there since. It has mostly focused on Minecraft content, both gameplay videos and animations. It also has featured other types of content sprinkled in over the years.

Scar began his YouTube channel ScarTheFur not long after joining the fandom. For a long time, it acted simply as a platform for him to upload jokes and convention videos. In 2019, it received an overhaul as Scar began focusing on creating commentary content, featuring either videos covering furry history or discussing topics pertaining to the community. It also occasionally features speed draws of his artwork.

Scar also created another channel dedicated to uploading lost music from the fandom's history, primarily from the Furry Music Foundation, but also features content such as The Furry Album from Kurrel the Raven. Paired with it was his first and to date, longest history video, titled The History of Furry Music. It covers the history of the largest music creators to ever be involved with the fandom.

Scar began drawing traditional recreations of digital sonic art prior to the fandom and began creating original content after he joined. Primarily a side hobby, his art is very identifiable due to its unique style and presentation. He, for the most part, stopped drawing the start of 2020 after feeling his art was going completely unnoticed. His artwork has been posted on his furaffinity and DeviantArt accounts.

Scar was apart of a shortlived company Dragoon Dreamers LLC. The only item ever published before they fell apart was a chapbook written by Scar called Love, Struggles, and Revelations. It featured twenty poems, as well as explanations behind each. He believes the quality is not worth purchasing, and the fact that he was never set up to receive any profit from the sales. Besides purchasing a copy for himself, he does little with after the collapse of Dragooon Dreamers the same year it was founded in 2017.

Hints of a proper novel have been released, with cover art for a book called Blue Tails: The Fall of Lumoria being commissioned. The book began as a side project between him and Luna Sky, and has no solidified plans for the future.