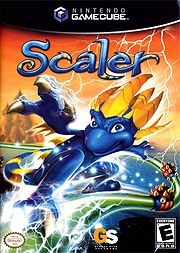 Scaler is a video game for the GameCube, Xbox, and PlayStation 2.

Scaler (also known as Scaler: The Shapeshifting Chameleon) revolves around the story of a 12-year-old, wise-cracking boy named Bobby Jenkins, who accidentally stumbles across his evil next door neighbor's (Looger) plot to dominate the world through use of mutant lizards from another dimension. Captured, they restrain him and strike him with a bolt of energy and transform him into his shape-shifting alter-ego, Scaler -- a vivid blue and yellow mutant lizard, packing razor sharp claws, a viciously long tongue, and the ability to shift into several other kinds of lizards to boot!

A network of unstable portals are the only connections between the different dimensions in said multiverse. Any being in control of these portals would have the ability to move freely between the different worlds, and unleashing Hell upon them. Unfortunately, Looger has managed to do just that through use of a device created by a scientist named Leon, who was sent spiraling through a portal to some desolate world. Bobby "Scaler" Jenkins is tossed through the portal by Looger and his lackeys as well, and must now travel the strange world in his new form, find, and defeat Looger -- lest the multiverse be "trashed".

Scaler features a number of interesting characters, but most of them have one thing in common ... they're all lizards.

Scaler "Bobby" Jenkins: The unlikely, sharp-tongued, wise-cracking, pun-spewing, pre-teen hero of Scaler. Bobby "Scaler" is a very energetic boy, who's wit is only matched by his swift reflexes. He loves lizards and skateboarding (not necessarily in that order). Despite being... well... a brat, he'll move Heaven and Earth to save his loved ones.

Leon: This once hero and brilliant scientist is now a mere surly survivor. Travelling with his flying companion, a massive, six-eyed winged reptile he uses to fly from place to place, Leon befriends Bobby, and teaches him everything he's learned to help him survive in the strange new world he's blundered into.

Bootcamp: "Captain Bootcamp", as he's called, is Looger's right-hand lackey. He, as with the rest of Looger's reptillian crew, has taken on a human disguise to blend into our world. Bootcamp took on the disguise of a drill sergeant. As scary (and ugly as Bobby puts it) as his human disguise may be, its nothing compared to how terrifying his true form his -- a massive, dark green dragon residing in his sinister lair in the lizard world -- sporting a massive jaw lined with sharp fangs, poisonous breath, and when he gets really mad, he'll even start to breathe fire!

Jazz: The only female on Looger's team, Jazz is a wiry yellow-eyed, pale-skinned lizard. She doesn't offer much physically, except slide attacks, but she makes up for that with a sharp tongue to rival Bobby's, wit, cunning, and intelligence. She's taken on the human disguise of a movie director, and is definitely not one to cross.

Rhombus: Yet another of Looger's lizard lackeys -- Rhombus doesn't seem to offer much in strength or intelligence, but he's mean enough and dangerous enough to keep you on your toes - beware the shockwaves he creates. His true reptilian form is deep blue, a bit on the round side, and wearing a constant mean glare. His human disguise is that of a CEO.

Turbine: Turbine serves as Looger's "muscle", and is masquerading as a construction worker. His reptile form is large, round, brown-scaled, bearing a wicked smirk, and heavily muscled. He prefers to get you with his toxic breath.

Bakudan: The first form Scaler acquires. While at a glance it looks small and harmless, beware its power -- explosives! Hauling a seemingly infinite amount of exploding spheres, the Bakudan is able to easily demolish several of the obstacles (be them living or otherwise) that it may come across.

Krock: The second form Scaler acquires. An armored sphere with chicken legs -- not very intimidating... Until, that is, it rolls into a ball and spikes shoot from it's scaley hide. Able to roll at extreme speeds and bowl over most enemies, the Krock is a nigh-unstoppable force if angered.

Doozum: The third form Scaler acquires. The largest and easily the most intimidating of Scaler's forms, the Doozum is a massive winged lizard, able to fly to any desired location, and blows enemies away with a powerful sonar attack. Though Scaler's Doozum form may be large, that's nothing compared to the size of the real thing!

Fruzard: The fourth form Scaler acquires. A "frilled chicken" easily describes this beast. While it may not be much to look at, it sports a rather intimidating glare, is swift (if not a little awkward) on its feet, and best of all -- its a walking sniper rifle!

Swoom: The final form Scaler acquires. Easily the least intimidating, and the least powerful of Scaler's forms, it still proves to be one of the most useful, as it can do what none of his other forms can... swim. Slow and awkward on land, its walking pattern (and physical build) resembling a penguin crossed with a seal, its almost completely helpless when not in its element.

Scaler features several unique reptillian monsters for you to battle, some on land, some in the air, and some underwater. Listed below are only a few of the creatures you're likely to find.

Arachnos: A tiny spider-like creature, never found alone and usually hanging from a wall. Easily taken care of with a quick lash of the tongue, but can become a hassle if encountered in a large group -- as they move very, very fast.

Screepies: Frog-like creatures and the first things you'll encounter in the world. They attack Scaler in groups, leaping at him with jaws agape. They too are easily taken care of with your tongue.

Hidden Crab: A little beast that likes to hide and throw explosives at you! Keep moving and he won't be able to get a lock on you.

Ratos: Another early discovery for you, the Ratos persists through almost every area of the world, and, despite its name, resembles, sounds, and behaves more like a canine than a rat or a lizard. A bit bigger than Scaler, and always coming at him in packs, Ratos can be very dangerous. They move quickly, but their downside is their short attention spans. They usually take a long time to even realize Scaler is nearby. Stun them with your tongue, then take them out with your claws.

Dragon Shooter: A powerful, maniacal, floating dragon with a dangerous obsession with fire. Hard to take out and able to attack and kill you before you can even touch him, the Dragon Shooter is a force to be reckoned with. He can often be heard laughing in a very creepy way as he sets you aflame. Stealth closer if you can, stun him with your tongue and take him out with your claws. BE CAREFUL though, as he has a nasty habit of snatching you up in his claws if you get to close, and slamming you into the ground.

Zarpac: Its swift movement, sharp reflexes and powerful claws always lead me, personally, to describe this beast as Scaler on steroids. One of the strongest enemies you'll face, he's very hard to hit and has a large amount of health. Flying across the battlefield and moving at lightning speeds, he'll try and pounce on you from afar and rip you to shreds with his claws! He's only really open to be attacked after he tries to attack you and misses. Don't get to close and try and press any advantages you think you might have -- if he gets you beneath his claws, you're in for hell.

Dragon Warrior: A massive, lumbering creature with the ability to stealth, he attacks with brute force, poisonous breath, and can block your attacks with his spikey armor. Leap into the air and bring your claws crashing down onto his head when you see and opening, and don't let him grab you -- he can take three bars of your health in one blow if he does.

Flying Yeti: This flying beast is able to attack through use of icy cold breath -- avoid.

Griffon: It hovers, waiting and watching, and if he sees you, he'll move to attack at lightning speed. Try and take him out before he sees you, or just use your camouflage to sneak by.

Rattlecrab: A giant flying crab-like creature, he ambushes you while you are attempting to gain an egg. He hits hard and has a large amount of health. You can only shoot him when he's getting ready to attack, by firing the Repodactyl's laser bolts into vulnerable areas spread across his body.

Dragon War Beast: One of the biggest non-bosses you'll face, the War Beast appears invisible when you first start fighting him, and is able to attack through brute force and lightning blasts. Watch him carefully; when he raises his glowing fist in the air and crashes it down, jump to avoid the ripple of energy that follows, and strike him as he struggles to free his hand.

Iguana King: A massive, tusked, frilled beast resembling an iguana. Able to strike you with a variety of attacks, do your best to get in close and attack with your claws.

Trapper: This beast cannot be killed through any means you know, but it can be fooled. Lurking in sand and mud, the head of the trapper constantly surveys its territory while its extra "arms" shift around, trying to find food. Use your camouflage to sneak past it, and find a patch of hard dry land where he can't reach you. If you bump into him, or touch any ground of his territory while not stealthed, one of his arms will grab you and drag you beneath the surface to be swiftly devoured. Be on your guard.