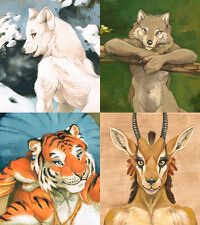 Scale (real name Alessio Scalerandi; born in 1980) is an Italian artist best known for his furry oil paintings. He has been creating furry art as a hobby since he came in contact with the furry fandom in 1996. After graduating in Computer Science and spending several years as a software developer, he has embraced art as a full-time freelance job since 2015.

Scale has been one of the very first Italian furries. His furry works of the 90s and early 2000s were strongly influenced by "old school" furry art hosted by fanzines and by popular furry sites of the time such as the VCL, but he would also draw upon European comics and anime and experiment with various media. In the same years, he helped design the chakasa species.

In his comic The Synetai Chronicles which ran in 2005 and 2006 he explored a mixed community of predators (wolves) and prey (reindeer) living in symbiosis as they shared a common grade of evolution.

Since the late 2000s he has been developing a refined style integrating elements of Old Masters painting, post-Impressionism painting and Golden Age illustration. Among his greatest inspirations are the works of Leonardo, Frank Frazetta and Paul Gauguin.

Scale has been a staff member of Zampacon from 2015 to the convention's final edition in 2017. He has hosted several life drawing panels at Eurofurence.

In general Scale's works offer a very sensual but tasteful and realistic view of anthropomorphic animals. He takes inspiration chiefly from real animal facts and life drawing. His main goals have always been creating anthropomorphic art that wouldn't look out of place in an art gallery [1] and building upon the most interesting philosophical implications of present-day furry art.[2]

Scale has long advocated that "the appeal of furry art doesn’t lie in shock value or kinkiness, it lies in playfulness and non-anthropocentrism, in our peculiar ways of preserving childish fantasies about animals so they end up entangled with adult fantasies and serious introspection".[3]