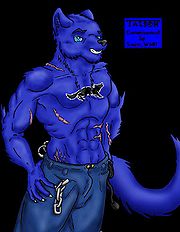 Sayai Wolff is a character on Tapestries.

He is the former owner of The Golden Lash and is a Manager (and part time ZA) at the Harem Auctions Theater, having worked there since it's opening after the Platinum Auctions Theater closed down. He and his partner Demifur run the auction house while Nightwind (the local code monkey) repairs, updates & maintains the Vixtail currency system as well as the pet and 'neer broadcast system.

Demifur is in charge of interviewing and hiring new recruits trying out to become new 'neers while Sayai_Wolff is in charge of firing them in order to clean up and maintain as much of an updated list as possible. Each Manager does need to check with the other first before someone is either hired or fired in order to maintain a fair system of checks and balances at the auction house.