Savage Turtle Studios is a fursuit-making studio created in 2007 by Quaylak and her husband, Jakejynx. They are located in Savannah, Georgia, USA.

Savage Turtle Studios has been attending Furry Weekend Atlanta and Anthrocon as dealers since 2008. 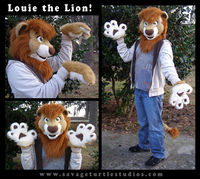 Louie the Lion partial--10% of the sale price was donated to the con charity, Conservators' Center Inc.

Following the 2011 Japan Earthquake, the studio organized and participated in a large multi-artist charity auction that raised $885. The funds were donated to the Japanese Red Cross, Doctors Without Borders, and Direct Relief International.