Satoru Aka is a character in Extinctioners. 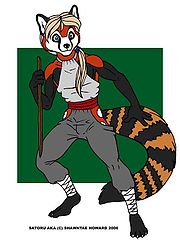 Satoru Aka is a childhood friend of Pandora Lee and Takemitsu. During a hard time for his rather large family, he was sold into labor to help support his family at 13. The symbol of this servatude was his silver neck collar (red pandas are in a lower social class than giant pandas). Takemitsu convinced his wealthy father to "buy" Satoru to work for them and thus pay off his family's debts. Technically Satoru became free then but chose to work for his friend anyway as a debt of honor to repay him for his kindness. He was unaware that Takemitsu had acted only for his own selfish intentions, one of which almost got Satoru killed (Extinctioners issue 12). Now Satoru is completely free and living the life of a roaming adventurer.