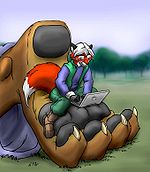 Sasuke Starseeker (born July 1980) is an Italian male red fox. He has red fur, black ears and paws, and some white lines on both cheeks. He also has a little fluff under his neck and white fur on his belly. He has short spiky white hair and blue eyes. He usually wears a green jacket with a blue t-shirt, green pants, brown boots, and short black gauntlets. He often carries lots of high tech gadgets, including a handheld communicator, a stun gun, and some stun gas bombs.

Sasuke is a macro researcher (scientist/explorer) and teacher of anthropology and archeology in Avalon, capital of Planet Prometeus, Gamma Sector. Originally a regular teacher, his life was changed when an accident of unknown cause destroyed the majority of the city's main quarter, claiming many victims, including Sasuke's wife and young child. Sasuke, shocked, became obsessed to find the truth. The official version to the tragic accident was a terrorist act but Sasuke, sacrificing all his resources, found that before the explosion, a huge shadow rose, resembling a macro fur. This led him to begin his research on macro furries to piece together what happened that day. This research led him to a distant planet where he met Sparky the Chu. This was his first contact with a macro fur lifeform. After spending time together and getting to know each other, Sasuke put his plan of revenge aside and decided that he would dedicate his life to macro research, learning macro culture, history, behavior, origins and trying to secure a deep integration between normal and macro furries. During his traveling days, Sasuke became a good friend of Rf (Ravagefox). Sasuke is also Mud and Sirus's blood brother and was RedFoxy Darrest's boyfriend.