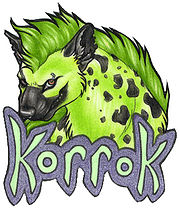 Korrok (real name Sarah Thomas, born November 1984 in Glasgow, Scotland), is a furry artist who lives in Rotterdam, Netherlands, with her boyfriend Greye.

Korrok has participated in the furry community since early 2005, regularly attending first Furry Weekend Atlanta, and then Eurofurence. She was the artist guest of honor at ČeSFuR 2011.[1]

Korrok began drawing in January 2004. In 2005 she began to accept a variety of commissions and has worked for many clients in the fandom to date. Korrok's art has been featured in the Furoticon trading card game.