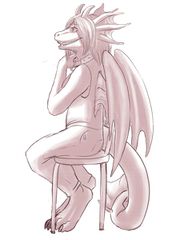 Sapphy is a sapphire dragoness also known as Saphira who lives in Newark, Delaware. She is originally from Galveston, Texas and moved to Newark in April 2011. Sapphy is currently a member of The Furst State and is a staff member for the Delaware Furbowl meets. She is a culinary arts major working to obtain a pastry chef degree and forward her business.

Sapphy is the chairwoman for The Furst State, which is a community based in Delaware. She used to be a staff member for the Delaware Furbowl running the Headless Lounge.

At FA:U 4 Sapphy volunteered for fourteen hours, mostly watching over the headless lounge and at Furstivus she volunteered for many hours under LupineSpark for the Child's Play charity auction that was held there.