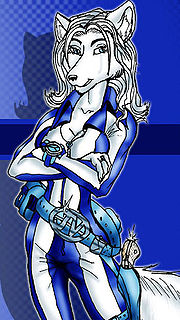 Sapphire, by Jodimest and Fox Champion

Sapphire is a character in the webcomic Jewel Vixens. She is a 22 year old white arctic fox vixen who serves as their leader. Sapphire has what some consider ‘the perfect body’, known by many as one of the most prolific supermodels in the world. Her fur is pure white all over - no black anywhere. Her headfur is usually worn freely, hanging down about to her shoulder blades with a few bangs curved out over her forehead. Given her amazing performance in helping the group escape from the faceless kidnapper that brought them together in the first place, Sapphire exhibited her prowess as a cool, calm, and mature natural leader. However, despite her adaptability and skill, she's still inexperienced at the whole "lead the team to save the world" routine and secretly wonders if she's really cut for the part. Sapphire's name is quite well-known in the pop culture of the times, being one of the most successful of the group as a model, and on missions her combat skills are surprisingly efficient. Her preferred weapon is a silver Guther-M revolver that was given to her by a friend of her father shortly after he disappeared. Her skills as a spy are top-notch, causing some to even question whether she's trained from a higher source, but she is constantly plagued by a habit of "looking before she leaps" and inexperience when leading a team of peers. Still, she keeps a level head and a focused determination that's yet to let the team down, even in the heat of an intense firefight. She also has a history with Onyx. A few years ago, she met the Irish lady while on an international photo shoot and the two quickly became friends. That friendship remained even after the team was formed, and together Sapphire and Onyx are prepared to take on the world. Sapphire’s past before she met Onyx is rather shady, though. No one's sure where she got her skills, but some speculate she had some police training, others think it might be higher than that, but no one ever got up the nerve to ask her. Her team knows she never talks about it, and never bothers her about a past she never mentions. All they know is that her father worked for the U.S. Government and has been kidnapped. Sapphire doesn’t hide the fact that she’s doing what she can to find him.