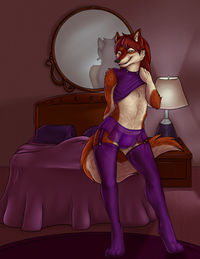 Sangie has been active in the furry fandom since 2006. Starting off as a gray wolf, in 2007 he fell in love with red wolves and decided to base his character on them, as he felt the most similar to that breed.

Sangie has lived in many places throughout his life, being involved in the fandom in most of these places. He has lived in Austin, Texas; Orlando, Florida; Louisville, Kentucky; Denver, Colorado; and Salt Lake City, Utah.

He was first involved with the ColoFurs group in 2006, Fritz_Fox being one of the first furries he met in person. This was his introduction to the fandom. Later, he's been involved with Utah furs and the Lone Star Furs.

The main thing Sangie loves in the fandom is artwork of all types. Starting off as an art collector himself, he saw there was no consistency in quality from artists doing their own prints, so he decided to launch InkedFur as a print service for artists and for fans.

When he first joined the fandom, Sangie noticed how much furries loved dance music, and started DJing for the fandom. He has DJed at several furry conventions and also held a professional club residency, and used to have an FM weekly radio show in 2006.

Sangie's love of music led to him sharing it with the furry fandom. He started off by helping Binx with Furry FM, doing a weekly radio show. Due to the stress of managing a station, Binx passed the torch to Sangie to continue working on. Unfortunately, he was unable to keep a strong audience and handed the station to Furocity Radio.

Due to disagreements in the direction the station should go, Sangie left Furocity Radio, leaving them with the station. He then worked with his previous staff to try to launch a new station called Fur.dance. Unfortunately, he did not have the time needed to devote to it.

Sangie is a known pedophile and is known for his involvement as a key player engaging in sexual acts with a minor with Nelizar, AKA SnakeThings. Sangie feigns innocence and contempt but as seen in his archived chat logs, he just doesn't want to get caught again. A very telling documentary made by YouTuber, Deadwing Dork, bares all and shows the true nature of who Sangie really is. Sangie has been booked in by police on multiple occasions.[clarify][2][3][4] Postings Sangie made to his FurAffinity journal indicated the arrests concerned sexual discussions with an underage individual on the internet,[5] and that a "skilled attorney in Utah" got his criminal record expunged in 2018.[6]