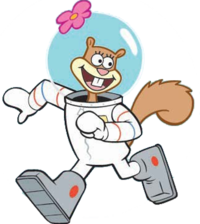 Sandy Cheeks (full name: Sandra Jennifer Cheeks) is a character in the Nickelodeon TV cartoon series, SpongeBob SquarePants. She is voiced in all franchises by Carolyn Lawrence.

Sandy is a brown squirrel from Texas. Being active and athletic, she lives the ultimate challenge of living underwater, but in an air-filled treedome, in Bikini Bottom (the SBSP community setting). 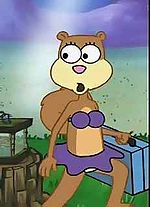 Sandy out of her suit

Over the course of the series, Sandy is shown to be a keen athlete and bodybuilder. When she isn't lifting weights or practising karate, Sandy will bring SpongeBob along on one of her thrill-seeking adventures underwater, dressed in her air-filled deep-water suit (similar to a space suit). Sandy otherwise wears a two-piece purple bikini (with a chartreuse bottom) when inside her treedome.

Sandy is very small and thin. She has a long poofy tail, long neck and large head. Her entire body is covered with thick brown fur. Ironically, in one episode, her fur is fake.

It is a popular idea among fans of the series that Sandy and SpongeBob are in a romantic relationship, and several episodes have frequently been highlighted as proof of this within the series:

However, this claim has been challenged, following claims by the show's creators that SpongeBob is asexual[1], but the pairing remains popular among fans. Several annuals have also officially confirmed that SpongeBob does hold feelings for Sandy, but do not state whether these feelings are returned.[2][3]

A trailer for Truth or Square, which was released on November 6, 2009, features footage of Sandy and SpongeBob getting married, further hinting at a relationship between them.[4]