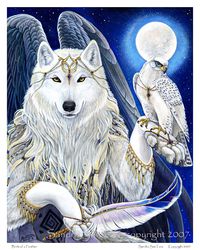 "Birds of a Feather"

According to her mother, Sandra SanTara was born late at night on October 22, 1962 in a car on a quiet country road in northern Illinois. Her mother held onto everything she drew, and Sandra made her first creation at 18 months old. Sandra has been creating artwork full-time professionally since 1989.

Her specialty is New Age visionary, tribal, and wildlife artwork. Anything symbolic and with deep spiritual meaning is of great interest to her. She feels it is important to keep a healthy, open-minded spiritual outlook on life. Her pursuit in school was zoology and art; combined with a love of the natural world, these two subjects have been a happy marriage in her art career.

Sandra's creative style is expressed through a variety of media including acrylic and airbrush painting, colored and graphite pencils, pen and ink, and scratch board. Besides the traditional flat surfaces, she enjoys creating on nontraditional surfaces from the natural world, such as stretched leather medicine shields and drum heads. Her paintings on feathers have achieved particular notoriety not only on the art show circuit, but also with a number of art galleries carrying them as well.

Sandra first displayed her artwork at science fiction and fantasy conventions, the first of which was the Worldcon in Denver, Colorado, USA in 1981. Previously she peddled felt dragon sculptures at local conventions and sold other sculptures while in high school in Littleton, Colorado, USA. Sandra has been in the fandom for over 25 years, and during that time she has won many awards in science fiction and fantasy convention art shows. Her work can also be found in other markets including renaissance festival circuits, Pagan and Earth-related gatherings, New Age expositions and festivals, tattoo conventions, art galleries, and wildlife art shows.

Body of work and achievements[edit]

Sandra's contributions to the furry community have included the Akita and Irish Wolfhound cards in the Kennel Club deck of 2006, as well as work for the Endangered Ark Card Deck including the Japanese Crane, Black-footed Ferret, and Polar Bear cards.