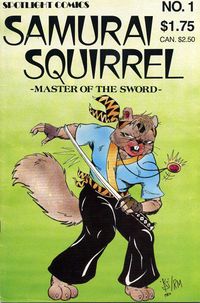 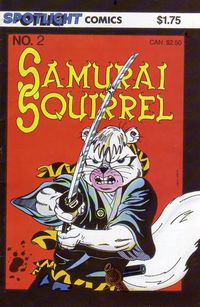 Samurai Squirrel was a comic book series that was created by Kelley Jarvis, and published by Spotlight Comics. It told the story of Nato-San, the Samurai Squirrel, in his epic quest to defeat the evil emperor Mordak.[1] Accompanied by his brother, the one-eyed squirrel known as Malik-qui, Nato-San battled a series of bandits, warriors, giant spiders, and the various forces of Mordak himself.

Issue 1 was published in September, 1986.[2] It contained two stories; "Into the Lair" by Kelley Jarvis, and "The Nuclear Spawned Martial Art Frogs", scripted by Jim Main with artwork by Peter Fitzgerald.

Issue 2 was published in January, 1987.[3] It contained a single story, "Along Came a Spider", by Kelley Jarvis.