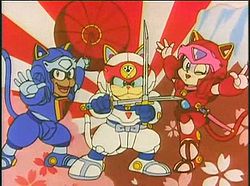 The anime was introduced to western audiences in 1991 by Saban. The stars of the show are three anthropomorphic cats who protect the city of Little Tokyo from crime while making a living running a pizzeria. The series combines action and humor and is noteworthy for its tendency to poke fun at itself and others. Throughout the series, the fourth wall is often broken.