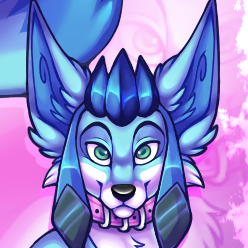 Samui Shiiba (born September 18, 1986) is a kitsune otherkin from Wheaton, Illinois, U.S.A., and is the owner of the community Kitsuria Network. His fursona is a cross between a six-tailed fennec fox and a Glaceon. Samui has been a furry since 2004. He writes stories, and regularly posts updates to them on his website. He also streams speedruns of some games on his Twitch channel.

Samui was born and raised in Hartford, Connecticut. In June 2006, he moved to Sacramento, California, and stayed there until late 2009. He lived in Bremen, Indiana for a few months before moving to Illinois in 2010.

This is Samui's main character used in his stories. He is a six-tailed fennec fox with icy blue fur. The fur on his chest and on the tips of his tails are white. He has seafoam green eyes, which occasionally change color. As his name implies, his strength lies in the cold. He is tuned to the water and wind elements, and most of his abilities involve the use of ice.

In Pokemon themed roleplay, Samui takes on the form of a Glaceon, which is very similar to his kitsune self. Depending on where he uses this character, the similarities would be limited to whatever the theme allows.