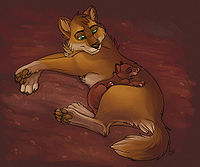 Samantha "Sammy" Robinson (born 1986) is a professional freelance artist from the United Kingdom. As of January 2008, she had been drawing professionally for six years, and has a Bachelors Degree in Graphic Design.

Samantha's website has been open since 2003 and contains predominantly furry and animal illustration. Samantha gets most of her freelance work from the furry auction site Furbid.

Although Samantha does not claim to be a furry or own a "fursona", she does have a character mascot named Buster whom she created in early 1995. Buster is a feral wolf character around which Samantha has created a storyline. Another character Samantha draws is Sampson the Flubat.

Sammy has been painting and drawing from a young age.[2] At school, she was known as "Sam. The girl who can draw good".

In high school, Sammy took a GCSE in Art and design. At sixteen she left school to take a National Diploma in art and design at college, dabbling in several artistic fields including animation and 3D design. After two years, she entered a three-year Graphic Design degree.

After graduating in 2007, Sammy went freelance, working chiefly in private art commissions, concept design, and book illustration. She has had her work published in ImagineFX DVD, Art D’Animaux, and in a pack of playing cards.