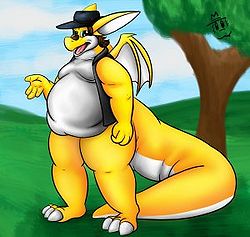 Samael (also known as Warlord 101) is a furry artist who lives in Scotland.[1] His fursona is a yellow dragon with a white chest and abdomen.

Much of Samael's artwork involves fat furs and vore.

Wanting to support the development of the independent video game Undertale, Samael donated 1000$ for its kickstarter, getting the "Fan Troll" reward.[2]

For this reason, his fursona appears in the video game as So Sorry, a hidden boss fight. He is the monster that can reward the player the most money in a single fight (300g) of the whole game. His boss fight is non-canon to the video game story, and looks more like an easter egg.[3] His in-game name, appearance and design of some of his attacks as So Sorry were his ideas that the game creator Toby Fox used and developed.[4]