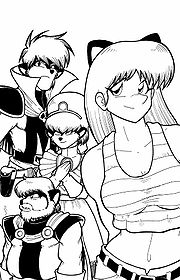 Asrial in her natural state along with Jeremy Feeple. Asrial's tail is just visible in the background. Image is from NHS and thus is © Antarctic Press/Ben Dunn.

Salusians are a fictional species in Ninja High School and Quagmire USA. They have a very close resemblance to skunks, with the only differences being that they all have a white diamond marking on their foreheads and only the females have tails.

Salusians depend strongly upon their technology to get by, often to a fault. So bad is their definition of civilization related to technology that their idea of "roughing it" includes a portable house with a satellite communications dish for their version of internet access, instant meals in pill form (just add water), and a computer along with the usual bed. To them, the human definition of roughing it is analogous to the Stone Age.

Perhaps because of their technological superiority over many other species, they consider themselves superior biologically as well and look down upon other races as normally not worth their attention or time. This has the side effect of irritating said other species when their attitudes turn arrogant and "I am holier than thou".

Salusian society is based on a monarchy. They are ruled by a King and Queen and pass succession of the throne to their blood heirs. Salusians of royal blood are possessing of incredible superhuman strength, to the point where completely uprooting a fully grown oak or maple tree from the ground is a minor matter of giving a tug on the trunk. This is perhaps the reason why they are chosen to be royalty. However, as the familial chain dilutes from the king and queen to the common Salusian, this superhuman strength also weakens. Thus those distant blood relatives of the royal family will not be as strong as those closer in blood to the King and Queen.

The crown jewels of Salusian technology are small instant-learning pills and the transformation chamber. The pills contain an unknown chemical mix that will enable the person who eats it to learn how to speak, write, and type any language, and thus blend into the culture more easily. Paired with this, the transformation chamber can alter the cellular composition of its occupant so the person will resemble any race. The changes made by the chamber are always reversible by entering the chamber again.

Salusians, since they think themselves superior, are also full of pride in their physical appearance. They are very attached to their fur on a psychological level and when they have to use the transformation chamber, they do so reluctantly and often with disgust of the form they will be given. However, the one thing they will refuse to part with while on alien planets is their ears. No matter what form they take, their skunk-like ears will always be present on top of their heads along with the normal ears of the given species they are transformed into.

Hybrid Salusians, specifically Kassy and Lexus in the series, do not need a transformation chamber to take on the form of the non-Salusian side of their heritage. Defying normal explanation, they can change at will in appearance from between being full Salusians to Human and back again. In Quagmire USA, this is demonstrated when Kassie turned from her human form to a Salusian with only a comical "change" blink to indicate it. In times of stress or sudden embarrassment or fear, they lose the ability to change form at will and will revert to Salusian form. It is debatable whether they do this as a natural, involuntary defense reaction; they can still change back at will.