Princess Sally Alicia Acorn is a fictional character appearing in the American Saturday morning cartoon Sonic the Hedgehog from 1993 to 1995, as well as the ongoing Sonic the Hedgehog comic book series published by Archie Comics. She is mainly depicted as a female, anthropomorphic, humanoid hybrid of a squirrel and a chipmunk. She has brown/tan fur, with red hair and blue eyes, and is usually seen sporting a denim blue vest and rubber knee-high boots. In the television show, she is voiced by Kath Soucie. In the two-part episode "Blast to the Past", however, her younger self was voiced by the late Dana Hill.

In 1993, an article in Sonic the Comic announced two new television series starring Sonic the Hedgehog, Adventures of Sonic the Hedgehog and Sonic the Hedgehog. Within the four pages of plot synopsis and concept art, a group of screen shots that greatly differ from the rest appear without explanation. These screen shots include a character named "Princess Acorn", presumably a squirrel with yellow fur and blond hair wearing a red dress. She shows up alongside characters that have since been featured in Sonic the Comic. This character shares little similarities in Sally's current appearance, but can be related to Sally through the given name in the screens.

In the comic book Sally went through several design and color scheme changes when she first appeared. Sally's first appearance was in Sonic the Hedgehog, and appeared with pink fur, brown hair, and boots with white trim. Before producing the rest of the series, Sally's design and color scheme was altered. She appears in all other episodes with her current design having brown fur, red hair, and boots without trim. In the second season, Sally starts wearing a blue vest, which becomes her normal outfit in both the series and comic. In addition to these visual changes, Sally's voice changes in later episodes, a result of Sally's voice actress Kath Soucie using her normal speaking voice. In the comic, Sally at first had a red-furred and blond-haired color scheme; but Sally quickly adopted the pink design the very next issue. Sally continued sporting the pink design until reverting to her current design around a year and a half later, in issue #16. 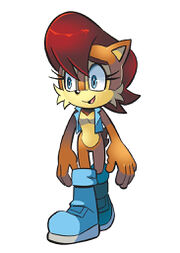 Sally appears briefly in early issues of Fleetway's Sonic the Comic starting with issue 3. Unlike her Archie counterpart, Sally is a minor character that appears alongside other villagers in the Hill Zones. This version of Sally is more round and a bit of a crybaby.

Sally has also appeared in UK media - the Stay Sonic guidebook, and associated novels. The Sally in this book does not reflect the more known versions of her, and is essentially unchanged from the video game sprite, which inspired her.

Sally is one of the main characters in the 1993-1994 Sonic the Hedgehog television series. In this series, her goals are to overthrow Doctor Robotnik and free her father, the King. In the first few episodes she normally stays around Knothole and helps the rest of the team.[8] Later on in the series, however, she takes more of an active role in missions.

Sonic Spinball - She appears as a non-playable character alongside other Sonic characters in a bonus level.

Sally has only shown a romantic interest in Sonic; as evinced in Mobius: 25 Years Later a possible future in which Sally and Sonic are married, rule the Acorn Kingdom, and have two children by the names of Sonia and Manik (named after Sonic's siblings).

Sally has been a known object of a crush from Knuckles the Echidna for a short period.