Sajin Komamura (狛村 左陣 Komamura Sajin) is a fictional character in the anime and manga series Bleach created by Tite Kubo. He is the former captain of the 7th Division of the Gotei 13. His lieutenant was Tetsuzaemon Iba.

Komamura is the largest normal character in Bleach, being 57 cm taller than his subordinate Jirōbō (the runner-up) and even more physically imposing. The only larger human characters are the Seireitei gatekeepers, who are each roughly thirty feet tall. He is also quite unusual in that he is an anthropomorphic canine; the specific animal is unclear, as he has characteristics of both foxes and wolves. He has been called a "bastard wolf" on occasion by Kenpachi Zaraki, but has red fur like a fox. 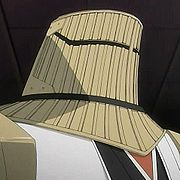 Komamura was initially very self-conscious about his appearance. While he has since removed the bamboo helmet (cloth headgear before he became a captain) that once covered his face, the rest of his clothing is designed to hide all but the smallest hints of his animal nature. His large gloves are the prime example of this, as they entirely cover his hands and go well up his arms.

Before meeting Kaname Tōsen, he also hid his spiritual pressure whenever possible so that others wouldn't pay attention to his appearance. After his fight with Kenpachi Zaraki (during which his helmet was destroyed) in midst of the invasion of Soul Society, he gained enough confidence to go without the helmet.

Being an anthropomorphic canine, Komamura's condition is made the subject of jokes in the omake chapters of Bleach. During one such sketch, he suggests making a game about owning a cat. In the special of episode 96, Shūhei Hisagi gives Komamura a "special comb" which Komamura likes. In reality, the "special comb" is a pet brush that Shūhei purchased from the human world with the help of Orihime Inoue. In another sketch, when Komamura mentions that he has a gigai prepared if it becomes necessary for him to enter the real world, his lieutenant pictures it as a brown-haired dog. Furthermore, in another omake chapter, when Komamura is asked by his lieutenant where the restroom is, he points in the direction of a pole where another dog was urinating at the time; Iba doesn't notice that the men's room is actually to the right of the pole.

Little is known about Komamura's past, except that he feels he owes a debt of gratitude to General Yamamoto and became close friends with Kaname Tōsen. Komamura met with Tōsen at a young age, while Tōsen was training as a student of the shinigami academy. They quickly formed a bond of friendship, mainly because of Tōsen's inability to see what Komamura really looked like. They eventually became captains in the Gotei 13, though the exact details aren't known. It seems he may have revealed his face before, either in confidence or by accident, as Aizen comments on how it's been a long time since he last saw his face.

Komamura's first speaking appearance in this arc is when he decides to go with Kaname Tōsen to oppose the intruders of Soul Society as well as the "traitor" shinigami from the 11th division together, along with their lieutenants. They head off Kenpachi Zaraki while he escorts the ryōka to the execution grounds, and fight him as a pair. After Kenpachi defeats Tōsen's bankai, Komamura steps in to block the final blow with his helmet, breaking it. He begins to fight Kenpachi with his own bankai, but abandons the battle when he senses that General Yamamoto is fighting someone.

While Komamura fought for General Yamamoto and the Gotei 13, Tōsen fought for the justice the Gotei 13 represented. Thus, when Tōsen chooses to side with Sōsuke Aizen in his betrayal of Soul Society, Komamura is shocked and feels Tōsen has lost his morals. In his anger, Komamura confronts Aizen himself, but is quickly defeated when Aizen uses a level 90 kidō spell on him. Komamura confronts Tōsen verbally as he departs Soul Society, asking if his friend also fought for the justice he vowed to protect. As Tōsen's answer showed he was still following his own sense of justice, Komamura decides to awaken his friend with his own hands.

Komamura's zanpakutō is Tenken (天譴, lit. Heaven's Punishment, Viz: Sword of Heavenly Retribution). Its 'shikai' command is "roar" (轟け todoroke). In its shikai, Tenken creates various body parts of a giant to copy whatever body part Komamura moves; for example, should Komamura swing his sword, a gigantic disembodied arm wielding a sword appears and does the same thing.

Tenken's bankai, named Kokujō Tengen Myō'ō (黒縄天譴明王, lit. Heavenly Punishment of Kokujō's King, Viz: Divine Retribution, Black Ropes of Ruination) brings forth the entire giant. Like in the shikai, the giant copies every movement made by Komamura. Kokujō is the Japanese name for one of the eight circles of hell in Buddhism (Kālasūtra).