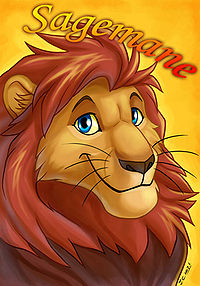 Sagemane (born July 28, 1983) is a Bay Area Furry, living in San Francisco, California, United States. His fursona is a lion.

Sagemane is mated to Tenebris, a tanuki with whom he now lives. He shares an apartment with Tenebris and Hunter Gryphon, and this is the venue of the San Francisco Furry Party, which is held about once a month.

Sagemane has attended several conventions, including Anthrocon 2006, Califur 3, Further Confusion 2006, 2007 and 2008, as well as Megaplex 5. He can be seen at conventions wearing a fursuit he created of his character, completed in 2007.