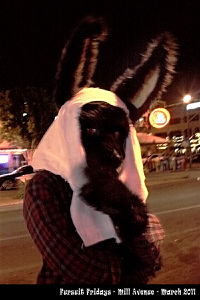 Sage Wolf is a fursuiter and sculptor who lives in U.S.A.

Sage's fursona is a light brown Mexican Wolf. The coloration and markings are similar to natural wolves, but the eyes are green instead of amber.

Sage has been part of the fandom since 2005, but was not especially active until 2009. He has shown sculpted art in the Califur and Anthrocon art shows and artist alleys.

Sage's fursuit was built by himself, and a second suit is already in progress.