Sachi is a character in the comic series Andorozon created by Ken Singshow but was also featured in Extinctioners comic series created by Shawntae Howard. She is an Orca Anthroid. 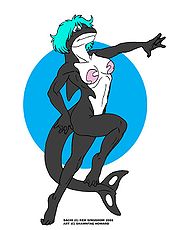 Sachi is the 5th member of Andorozon. Her new life as an Andorozon made her old life and connections with it very difficult. Most wild orca dislike humans and her new humanoid form made her family and boyfriend reject her. She feels lonely because of this. Due to the fact that her mother is the leader of their pod, Sachi is used to attention and likes it. She is their princess but she is not spoiled, due to how she was raised. Unlike Zora who feels she deserves all she has got or stolen, Sachi is appreciative of all the good and even bad events in her life. Sachi is in awe of the Surface world for it is very alien to her, she likes seeing all of it and experience. She cannot stand the dryness. Sachi gets a little moody when her skin dries out and a lot of her money goes to buy skin moisturizer.

Sachi is the only one of the Andorozon that actually has a real job out side of saving the world for the U.N.P.E.T. While the others are happy to stay at Haruki's house when there is no threat from the E.C.S., Sachi's independent nature has made her feel uncomfortable and restless staying home all day. So she went to local Sea World to get a job, hoping for a starring role in the marine show, but all she got was a janitor position. She has too much pride to tell others what her real job is. 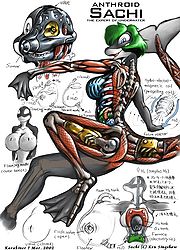 Sachi likes to cook and by default she has become the cook of the house since everyone else has no talent for it. Thanks to her time with the next door neighbors Sachi has started liking human music, especially hip hop and rock and roll.

Sachi is the "Striker" of the group. She is as strong as or even a little stronger than Merry is. She can swim at 100 knots, and can use her sonar or "Whale Speak" as way to communicate over long distances under water or to disrupt radio frequencies. Also like all of the Andorozon, she has a special power beyond that of her already amazing natural abilities, yet this still remains unknown. Rokki has seen that Sachi is able to produce more energy then she actually takes in and has some theories as to how Sachi was able to survive the gigantic explosion on Dr. Van Burden's Island. If Sachi does have any special abilities, she, like Tsuneko, is keeping it a secret.

She hopes that after all this conflict is over with the ECS, that her family will accept her new body and maybe become a star appearing in movies and making music videos.