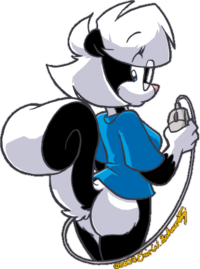 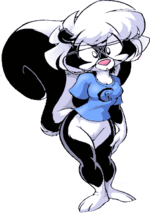 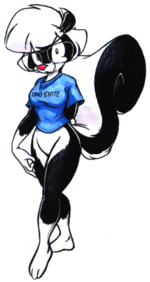 The oldest and first born child of Warren and Endora, Sabrina has one younger sister Tabitha. As a child Sabrina had, and still has, a love for Transformers toys but her parents, being concerned with their daughter's interest in boys toys, never bought any for her.

After meeting the boss Zig Zag who is a white tiger-striped skunk, Sabrina nervously took the job designing the studios website, and nervously because Sabrina is last person you'd ever find in a place like that. But not wanting to lose her new job as quickly as last one, and seeing that her new job has great pay at the end of each week, she puts up with her job and her boss.

She is also one of the two main characters of Sabrina Online: The Story by Chris Foxx, where her full name is Sabrina Mustelidae. The combined popularity of the comic and the story have inspired numerous authors to write stories in that setting, commonly referred to as the SabrinaVerse. In one of the stories, Tabitha, she died in a car accident when Tabitha was 16 years old. When Tabitha is now older, became involved in building a time machine to prevent her untimely death.