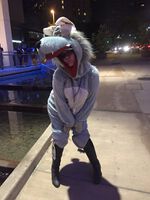 Anthrocon18, seen in a "free fursuit" she obtained from a stranger at Furpocalypse 2017

Sabarika, also known as huskyjackal (born in Kentucky, USA), is a furry artist and photographer.

Sabarika's first introduction to the furry fandom was through artist Matrices's art, and she subsequently visits to Huskie's F.A.N. furry archive. A great deal of Sabarika's initial artistic inspiration came from Huskie_(artist) artwork.

Sabarika's fursona is a husky-jackal hybrid, created in the early 2000s. She has neon rainbow markings on her tail, and large lower ear tufts. She is frequently cited as being a sparkledog.

Sabarika has lived in several states, including: KY, NC, TN, AL, OH, MA, and NJ. She enjoys cars and travel, and used to own a hearse she road tripped in. She adopted a husky x Australian shepherd mix in 2005 from a shelter in KY named Diaz, who is still her companion and cherished pet at 15. Photographs of Diaz and other dogs have been published in several books focused on dog behavior and training. She used to do professional photography but her equipment was stolen so her pursuit of this is on hold until she can replace it.