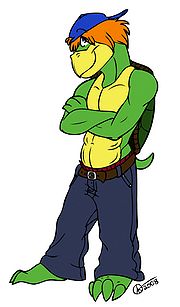 Halfshell Hero joined the fandom in late 2004 after leaving the Teenage Mutant Ninja Turtles fandom. While surfing on various websites, he found anthropomorphic art, and was interested in the furry culture. After submitting his own art to the InflatioNation, and was welcomed into the community, chatting with other furries online and getting to meet fellow furry, Sir Kain before AnthroCon in 2005. Halfshell was also one of the six original FurAffinity admins (2005) after its Beta launch in 2005 when it was under ownership of Alkora, who was known as Byakko Wolf or Jheryn Lightfoot then. 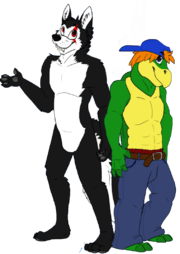 Halfshell's main is a turtle fursona. It depicts from his transittion from his Teenage Mutant Ninja Turtles community to the furry community in 2004. The turtle character has gone through a few changes, the ninja attire and black headband was removed in 2005 and left remained a normal turtle for a few years after. When some the TMNT community joined the furries, red hair and then blue cap then was added in 2008.

Sabaka or Sabaka (Zlo) Mahusky [pronunciation: Saa'baka-shlo] is Halfshell's first original furry character. The character is a black and white husky-wolf mix (breed called wusky), with a scar down the left eye to his cheek. Sabaka Mahusky mostly donning a blue Hawaiian shirt with light blue palm leave design over it. Sabaka's alter-ego, Sabaka'Zlo is wearing his trademarked armor suit. Sabaka, the Russian meaning for dog or wolf; Zllo, the Russian meaning "demon", "evil", "devil". The idea for the character was spawned when Halfshell and a local kid were creating ideas for comic book characters. Sabaka is currently being used for Ironclaw role-playing game, and is Halfshell's retired fursuit since 2009.

Halfshell is also an artist working on traditional medium, mainly hand drawn using color pencils on paper. His artwork can be found on various platforms like deviantArt and Fur Affinity and on the discontinued SheezyArt and InflationNation. In 2005, Halfshell drew Disney's American Dragon: Jake Long inflated, which is now posted and published on Jeff Goode's official and personal site.

In late 2004, Halfshell was a member of InflationNation site where he and Jaimetud Otter recorded “Blue’s Christmas” a parody of Elvis Presley's "Blue Christmas", recorded for a friend, Blue. Later in 2005, Halfshell recorded "Leavin' the Con", as an effect of his Post Con Depression of AnthroCon 2005. Halfshell wanted to try parodies after the influence of SonicBlu, trying parody music, or also known as Furry Filk, covering various styles of Elvis Presley, Tom Petty, and Duran Duran.