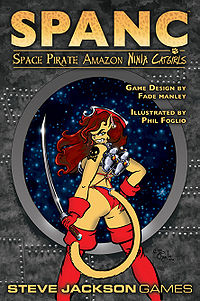 SPANC -- short for Space Pirate Amazon Ninja Catgirls -- is a card game designed by Fade Manley, illustrated by Phil Foglio, and published by Steve Jackson Games. The general gist of the game: Use your SPANCs well to pull off capers and acquire 10 Loot tokens before any other player does.

SPANCs have four skills: Space Pirate, Amazon, Ninja, and Catgirl (they were designed with a limited point system, which has since been reverse-engineered). Skills are roll under 2d6, with challenges listing a task to beat and a difficulty (such as "Ninja-2").

Capers are a set of four challenges. Players must set out teams of catgirls, of which at least one must make it to the end to make the challenge. With the average skill being 5, ill-equipped catgirls stand less than a 30% chance of succeeding at a particular task. Thus, if a player attempts to pass capers with a poorly-equipped team, he or she will only have a 27% chance of success.

Between equipping your team, sending off after the capers in the right way, and sending them off after other SPANCs, the game can be incredibly nuanced without sacrificing simplicity.