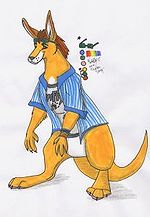 Seth Kangaruu Gyoten, also known as Skgyae or SKG (born May 17, 1989,) is a kangaroo furry who lives in Hinesville, Georgia, United States. He recently is attending Savannah Technical College to study for an Associates Degree in Accounting, and looking forward to obtaining his goal.

Starting in the furry fandom in late 2004 to early 2005, Seth realized his homosexuality with the help of the fandom and looked deeper into it. Since then he has been living with his father, despite his partially disowning him after his coming out of the closet, and is seeking other residence when time and expenses permit.

In early 2007, Seth created the kangaroo character SKG, and is mainly known for his love of male footpaws. Since then he has been starting to get known around in FA, and around the footpaw loving community and the kangaroo community, talking with such famous kangaroos such as Flinters and Roo Boy. He has recently been mated to a wolf-fox by the name of Baltis Geron McAries.