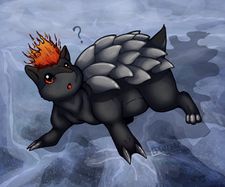 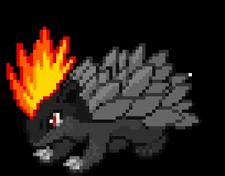 SIX, also known as SIX~~ and Sandlava, is a furry fan from Fleet, Hampshire, UK,[1] whose personal character is a Sandlava, a hybrid of Pokemons Quilava and Sandslash.

Sandlavas are the chance results from the copulation of Quilavas and Sandslashes. Four have existed, with the names Two, Three, Six and Seven. They are omnivorous, about three foot long and weigh approximately 80lbs. Within the Pokemon universe, they are described as Fire/Ground-type, and are known as "Hybrid Pokemon".

A Sandlava's head-flares are controlled both consciously and subconsciously, with strong emotions causing them to brighten and warm considerably.

Their spines are made of solid keratin, and can be controlled to a degree. Likewise, their claws are also made of keratin, yet these cannot be controlled; they are non-retractable growths from the bone, and are unbreakable as such.

It is unknown if Sandlavas can evolve. A form similar to Sandshrew, Cyndaquil or Typhlosion has not yet been discovered.

It is not known if Sandlavas can successfully breed. No female Sandlavas are known to be alive, though one has existed; the Sandlava named Two was female, giving the species an observed male-to-female ratio of 3:1.