From WikiFur, the furry encyclopedia.
(Redirected from SDF of BC)
Jump to: navigation, search
Community > People > SDF-of-BC 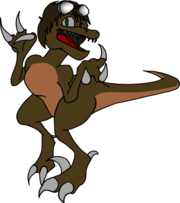 SDF, SDF_of_BC or SDF of Blitzcoder is a small, 2ft tall 5ft long, raptor-like dinosaur called a Staurikosaurus. Although it isn't strictly a raptor as they had not evolved at the time the Staurikosaurus was about, most furs will refer to him as one to keep things simple.

When first depicted this character was shown as being a traditional dinosaur dark green. However, more recently shows up as being brown with a lighter underside and chest (see right.)

In the image to the right he is shown as having hair and safety glasses on his head, these are not necessary. Also, in some pictures he's shown with a much more human body shape, but the feral body shape is usually preferred.

Although known as SDF he is usually registered as a variation of SDF of Blitzcoder. This is due to the fact that the nickname SDF is used by many others on the Internet and is ambiguous. Blitzcoder (BC) was the web site where on the 12th of December 2001, the nick was first created using both his names, which both start with 'S' and a simply press the next two keys in succession to create SDF. The BC web site didn't allow nicknames to be changed and after becoming fairly well known the nick name got stuck with him. It was only after moving to other places on the web that the nick SDF of Blitzcoder started to be use, sadly BC was closed. However, he still continues to use the nickname. Which was shortened to SDF_of_BC in a lot of places.

After identifying himself as dinosaur or raptor form for quite some time, he finally found out about the fandom when he was 16 years old. After his best friend Duragan showed him some web comics which weren't furry, but had some elements of furry in them. Further research into the subject brought up more and started talking with other furs.

In real life SDF lives in England and is currently completing the final year of a computing course at the University of Bolton. He regularly attends NorthernFurs' Manchester Main Meets twice a year.

SDF started out as an actual Staurikosaurus back millions of years ago in Gondwanaland, one day while wandering around something happened, he has no idea what but somehow he was pulled from his time ending up in some strange place, this place he named noowhear, in this place nothing exists quite right, because it is outside of time, but it does not completely lack time, so, everything both exists and doesn't at the same time, making things appear as ghost like clouds of dust.

After a while in this weird and freaky place he somehow changed becoming smarter and slightly more anthro in appearance although still quite clearly in dinosaur form. He also managed to find a way back out onto the time line, he is able to swap between the two places, in effect this means he jump from place to place and time to time. He doesn't really age although he tries to keep track of that.

That is how SDF the Staurikosaurus began, possibly a little far fetched, but he likes it. Not a story regularly recited, unless it gives him some advantage in an RP. 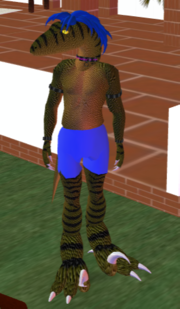 SDF, when not working on anything else, usually spends his time in Second Life. Mostly chatting and helping people out, sometimes he explores around and has built up quite a bit of skill in using LSL (Linden Scripting Language.) He owns a small plot of land which he allows friends to use as a sandbox provided they clean up after themselves. On Second Life he an Official Second Life Mentor, so likes to help anyone if he comes across them.